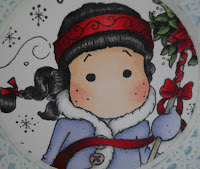 Hello everyone :)
Do you ever find that by the time you've finished a card, it bears little resemblance to the one you started out to make?  That's what happened with this one: it was meant to be an all-white design, but I thought the pale blue cardstock looked nicer with the white lacy doily;  also I bought some white-on-white pearl patterned card specially for this project to use as a background underneath the doily, but I've ended up using no backing paper whatsoever, and allowed the hammered blue cardstock to show through instead; and originally, I had pictured a square card shape, but have ended up with a book-fold A6 as you can see.  Only the idea to use a head-shot of Tilda made it through to the finished result, but I think that's probably the way a lot of cards are completed, with lots of changes along the way from the original idea.

I coloured the image with Copic markers, then added an Anita's Glitterations circle around the head and cut around it. This circle I then stuck to a recycled doily rescued from a restaurant (from my own food, I hasten to add, I haven't yet reached the stage of foraging around other people's tables).  Some faux stitching, a large organza bow and some bling in the form of a big brad, pearls and some sticky gems complete the card. 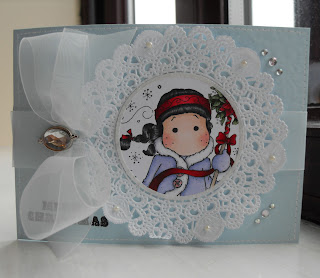 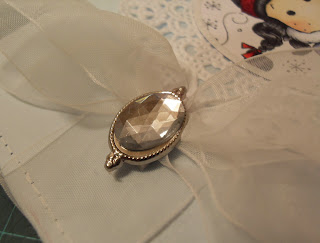 I am entering this in the following challenges:

wow Carole this card is so soft and adorable, like an angel.
Fantastic layout.

Awwww, this is soooooo pretty! I LOVE your Tildas! Hugs, Valerie

I love it, another beautiful card with this beautiful tilda image, she is one of my favorites.i like that bling!
Kevin xx

Fabulous card Carole. LOve Tilda's hair colouring lol. LOve your bling too! Know what you mean about cards ending up completely different than when you start off! Only thing I bet you was sure of was Tilda!! he! he!
Chrissyxx

Gorgeous card, Tilda is beautifully coloured and that charm wow! Thanks for sharing with us at LIIU, good luck. Hugs Suzanne x

It happens to me all the time Carole LOL. This is so gorgeous, great colouring :o)
Jackie xx

This is a lovely card, Tilda looks gorgeous framed that way.

Oh my word....this is sooo pretty!!!! The doily frams around the sweet little Tilda looks FABULOUS!!!! Love all the bling you added, too!!!!

Left you a message lol (No a journal!! )
on DC
Chrissyxx

Wow, this is so gorgeous! Love your coloring and shading. All your lovely additional details really complete this card perfectly. Thank you for joining us at Copic Creations. hugz, Mary

Hi Carole, it's me again LOL.
Thank you for your lovely comment on my awful cards, but I have now edited the post to make it suitable for a challeng, thought you might like to take another look :o)
Jackie xx

Love how you have made her face the focus of the card. Tthanks for playing at LIIU.

Wonderful Christmas card, love the sparkly jewel! Thanks for joining us at Just Magnolia this week x

Hi!
Arrived this morning lol.
LOve it!
Thank you sooo much.
Chrissyxx

Oohhhhhhhh its wonderful, also what a delighful blog, lol xx

Hi Carole, I just dropped by to let you know there is something on my blog for you
Kevin xx

Love how you framed this with the doily...so soft and wintry! and you've colored her to perfection! My cards rarely end up how I first envision them.