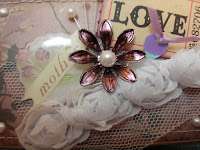 Hello there, I hope everyone is well today. Thanks so much for the great comments left for my St Patrick's card, I just saw that I won a Top 3 at Inky Impressions with that card, which makes me doubly happy cos it was the first card I've put in a challenge for some months. I mentioned that I felt 'off my stroke' with my colouring on it because I felt I could have done it better. You know what it's like when things don't turn out quite as you'd expected! It wasn't a bad colouring, just wasn't what I'd pictured when I started out. But why do we have to get three quarters of the way through a colouring before we realise it isn't gonna work out as planned? I don't have enough energy to be a perfectionist anymore so I never scrap an image, he hee.
Anyway, as it was Mothers Day last Sunday, I made this little gift box - it's just big enough to hold 6 little wrapped chocolates. 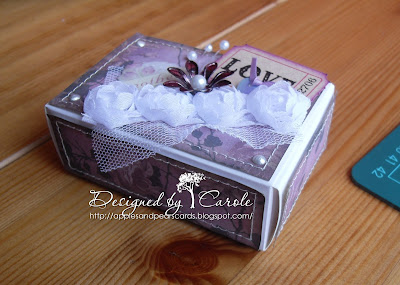 It's a recycled project because I made it from one of those box blanks that chemist's use to put blister packs of tablets in - I just ripped off the label ﻿and decided to use it in crafting as it was in mint condition. Here is the 'before' photo with the papers that eventually were attached to all the sides: 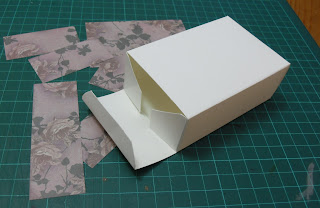 I used some Papercellar paper and cut rectangles to fit on all 6 sides of the box. Then I aged them with distress inks in Tattered Rose and Weathered Wood, and handstitched around all the edges. 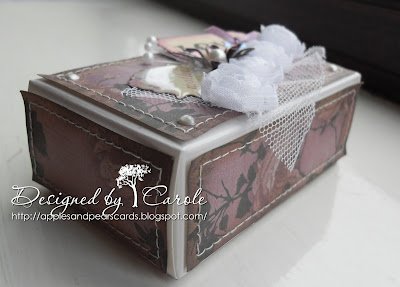 Only the top of the box is decorated....I used some rose ribbon in white, and I quite liked the lacy fabric that the ribbon was attached to so I didn't cut that off and instead let it overhang the edge of the top side. Then I took a rigid epoxy sticker bearing the word 'Mother' that I found lying forgotten in a box, and tried to age it a little. I didn't have any ink pads with the sort of ink that would dry on smooth surfaces, so I took a copic marker and used that instead to add a faint bit of ink around the edges. Then I used a darker copic marker to colour a silvery metal flower and added this in the centre. The flower had lost it's original gem centre, so glued a pearl bead in the flower centre. A Tim Holtz adage ticket saying 'Love', a sequin heart with some co-ordinating ribbon, some pearls from a spray and some liquid pearls finish it off. 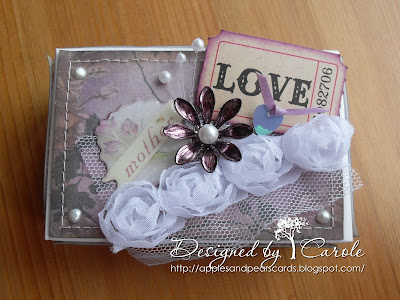 It was an easier project in one way because there was no colouring involved (although I did still manage to use my Copics, he hee) but in another way it was harder as it took a great deal of time to handstitch all the papers and decide on a layout. I'm happy with it though and it's nice to spend time on special projects.  It was hard to photograph, so here's one final shot of the box: 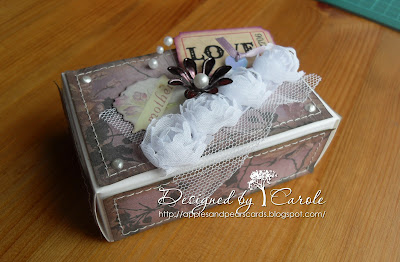 The card that accompanied the box is my May project for Sundays With Crissy, so I can't show it to you yet (wink!).
I'm entering this box in these challenges:
Bunny Zoe's Crafts - Shabby Chic/Vintage
Craft Your Passion - Just Sentiments
Creative Inspirations - Anything Goes
Glitter Geeks - Mothers Day
Lollipop Crafts - Sentimentally Yours
Moving Along With The Times - Special Lady
Papertake Weekly - Bingo (Gems - Free - Lace)
Sentimental Sundays - Metal (the flower in the middle)
Squirrel & Fox - Love
Top Tip Tuesday - Mothers Day
Till next time, keep smiling!

Carole what a beautiful little box...love the net you have used on the top

Beautiful box Carole, great idea to recycle the tablet box, I like the paper the fab stitching and the roses.
Kevin xx

This is a gorgeous little box Carole... you hand stitched all that paper !!! wow you have more patience than me.xxx

Hi Carole, Oh this is to cute for words, so pretty and what a fab idea...love to re-cycle...lol....glad you won with your card, it was FABULOUS...I did say so at the time...did I not...lol...xxxxxx

WOW what a great wee box, Love it, thanks for playing on MAWTT this week, Hazelxox

What a great project Carole, love the flower ribbon, bought some of them myself the other day! Thanks for sharing with us at MAWTT this week, good luck! Pami x

Your box looks great. Like the flower.
Thank you for playing with us at Craft your Passion.
LG Michelle

what a fab little creation Carole, a great use of a little pill box. Love the pretty top and stitching.
Thanks for joing in with MAWTT this week xx Mau

Hello Carole
YOu did a fabby box! Love it!
Great JOB!
Thanks for joining us at Lollipop Crafts. Good Luck!
-Sony DT-LC
sonia-studio60.blogspot.com

This is fantastic! I love how you've altered it and the colours and design look beautiful! Thanks for joining us at Glitter Geeks this week, Paula :))

Such a sweet wee box Carole...love the papers hun :o)

Oooooh my word, Carole!!!!! I loooove your gorgeous gift box....it's shabbylicious!!!! I can't believe you had the patience to hand stitch all those edges....WOW!!! The metal flower, roses, ticket, pearls...everything is absolutely FABULOUS!!!!! I can't wait to see the card that goes with it!!!

Carole, love this gift idea and it's such a beautiful creation.

Keep up the good work

You are far to self critical Carole, your work, colouring and all, is always of the very best quality.
I love you little box, what a great idea :o)
Jackie xx

Lovely project Carole! Thanks for joining us at Glitter Geeks this week!

Hand stitching... you put me to shame; I don't even use my sewing machine, lol. This is a lovely project, and the six choccies sound pretty good too :-) Donna

This box is gorgeous and even without chocolates in it :) - thank you for joining the glitter geeks challenge this week x

Gorgeous project!
Thanks for playing with us this week at Lollipop Crafts!
;)

Absolutely gorgeous. Thanks for sharing at Sentimental Sundays!

This beautiful gift box couldn't be any more perfect! I love that you recycled AND you've created such an amazing present. PLUS...there's chocolate!!! My gosh, could it get any better than that? I think not. :)

Thank you SO much for sharing your talent with us at The Squirrel & The Fox and Top Tip Tuesday as well. Best of luck to you and have a lovely weekend.
Hugs!

WOW did you work on this! I'm sure your mom will love it! Also, thanks for pointing out what was metal. Smiles, Samara - DT for SENTIMENTALS.

This is such a gorgeous project. I love the detaisl you've used and the colours also. Hugs Michele x

This is gorgeous Carole and such a fab idea! When I think of how many of these boxes I have thrown away I could kick myself, lol!

Thanks for playing along with us at Papertake Weekly this week and good luck!
x

Fabulous gift box and perfect for a special lady like a Mum, the colours and design are superb.
hugs
Lorraine x